Giethoorn oozes charm and it’s fun to visit. The tiny village has waterways instead of roads; and transportation always used to take place by punt. Today, mainly tourists cruise the quaint village canal in slow and silent electric boats, admiring the (farm)houses and well-kept gardens. As many of the tourists don’t know how to handle a boat, comical pile-ups are part of the package.

The village lies on the edge of Weerribben-Wieden National Park. Picture a paradise for first-time kayakers! The many channels are a bit of a maze, but so tranquil…it makes you feel like you are kayaking inside a painting.

You feel alone in the world, just you and the water birds and the reedbeds... and an otter if you are lucky. As much as this may look and feel like pure “nature”, the oddly linear landscape of strips of land and water was shaped by man in previous centuries. This is peatland. Trench by narrow trench, the peat was excavated and laid on adjacent banks to dry. The turf was then transported by boat to town where town dwellers used it for heating and cooking. The trenches filled with water. In places, the narrow ridges of land were washed away in storms, and open water developed (“Wieden”).

In a low-lying peat bog complex such as this, all the stages of hydrosere can be found i.e. all the stages of natural succession from open water to reedbed to woodland. A rather special stage of succession in former peat pits is quaking bog: a floating mat of vegetation (sphagnum moss and sedges) that undulates underfoot!

This is the northern part of Overijssel province (“De kop van Overijssel”), a great region for cycling because it’s low in traffic. Places you will cycle to on this holiday are Zwartsluis, Blokzijl, Hasselt, Zwolle and the lovely town of Kampen. Centuries ago, the latter three were members of the Hanseatic League, an alliance of merchant guilds in northern Europe.

Thanks to this trading alliance, the merchant ships of Kampen of the 14th century had safe passage all the way to the Baltic countries, taking salt and wine and bringing back grain. In Kampen, the goods were transferred from seafaring ships to river boats and sold on to Holland, the Rhineland and Westphalia, at a profit of course! Thanks to this arrangement, Hansa towns prospered. Merchants commissioned architects to build houses and warehouses; town councils commissioned town gates, town halls and canals. The towns grew to be very attractive and – sixth centuries on - can still delight a passing cyclotourist. 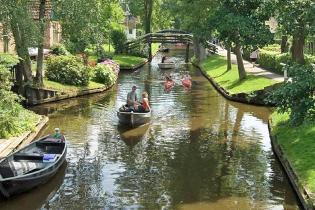 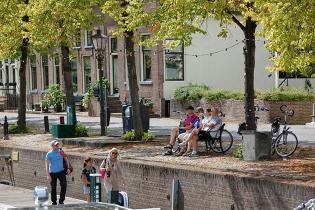 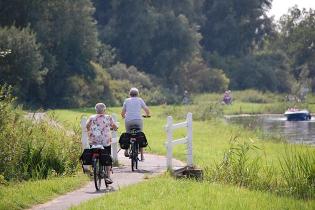 Is this not the holiday you're looking for?
See all holidays »»

4-day holiday based at a cyclist-friendly hotel in Amsterdam. You will stay 3 nights in Amsterdam and have 2 full days at your disposal for cycling. There are 4 routes for you to choose from.

Bicycle tour along the famous Dutch Water Line, a series of defence works which has been selected to be placed on the list of UNESCO World Heritage Sites in 2019.

Holland-Cycling.com brings together the most popular cycling holidays in Holland. See all holidays »»