Holland has lost its top position on the Cycling Barometer, a statistic report by the European Cyclists' Federation (ECF) giving insight into how EU countries compare on cycling issues. What issues does the barometer look at? Does the outcome mean Holland is becoming less bike friendly? 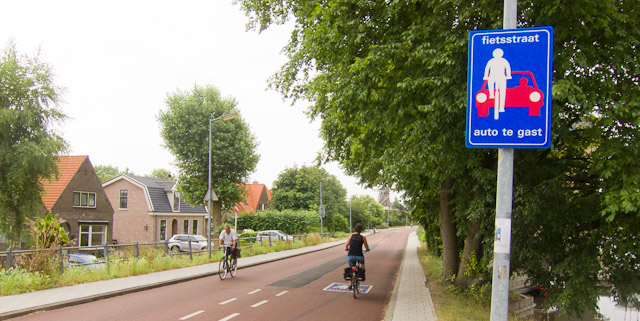 Bicycle street where cars are allowed as guests. Photo © Holland-Cycling.com

"Denmark advocates conquer the first place in spite of Netherlands supremacy on cycling use," according to the second Cycling Barometer published by the ECF this May. The barometer was launched in 2013. The idea behind the barometer is to provide a multi-dimensional view on cycling in all 27 EU countries.

"The ECF Barometer was built as a talking point to raise awareness on the need to get good cycling data. It was a big success last time so we hope to see the discussion continue again this year," says Chloé Mispelon, project leader for the barometer.

Back in 2013 Holland was proud to take leading position. Now, the second time round, Denmark comes first and Holland second. Although this is still something to be proud of, the outcome does seem to suggest that Dutch cyclists are worse off now than they were two years ago. We wonder: did we miss something? Our impression is that some great developments have taken place over the past couple of years - and are still ongoing.

In Holland a lot of effort has been put into building new cycle highways and creating bike friendly routes into towns to encourage commuters to use the bike. We've seen more and more bicycle streets appear, roads where cyclists have priority and cars are merely allowed as guests. Thanks to the e-bike, the distance people are willing to commute by bike is increasing and the number of elderly people that cycle has grown.

More guarded bike parking spaces are being created and as they're free, they're being widely used. We've even seen a new phenomenon in the cities: the bike traffic jam. Being in one might be a bit of a nuisance, but it's a clear indication that Holland must be doing something right.

The ECF statistics confirm our impression. Over the last two years, the number of people that name the bike as their most often used means of transport has increased by around 20%. On this point Holland surpasses all other EU countries. The ECF calls this aspect the ‘modal share’, a snapshot of the importance of cycling in general in one country. But the barometer also looks at four other aspects: safety, tourism, bike sales and advocacy efforts. The countries are given points according to their rank in each field. All points are summed to get a final score - all fields weighing equally.

Not the whole story

Apart from the increased bike usage, the statistics for Holland have remained more or less unchanged since 2013. Interesting, because you'd expect that higher cycling use would mean more people would be, for example, buying bikes. Actually, the sale of new bikes has dropped slightly since 2013. Does this mean that the Dutch have less money to spend? Are they buying their bikes second hand? Or is the market simply saturated now that there are more bikes in Holland than people? The statistics don't tell the whole story.

Cycling tourism is big business in Holland. Come summer, come winter, if the weather's fine you'll see cyclists going out for a recreational ride. Many foreign visitors also take to the bike during their stay in Holland. Some just for a ride along the Amsterdam canals, others for a full-fledged cycling holiday. Surprisingly, Holland only comes fourth in the category cycling tourism. We can't help wondering what the ECF has actually measured here.

Although Holland has dropped to second position on the ECF Cycling Barometer, in our experience Holland is becoming more rather than less bike friendly. Cycling is more popular than ever and a lot is being done to improve safety and infrastructure - not only for commuters and every day cyclists, but also for recreational cyclists. While there's always room for further improvement, in Holland cycling infrastructure and facilities are pretty much take for granted. Membership of cycling advocacy and pressure groups is low - cycling is an integral part of daily life.

Let's hope that in two years time Holland ends even lower in the ranking. That would mean that our European neighbours are catching up with Holland and cycling has become safer and more widespread in Europe. In the end that's what the ECF Cycling Barometer is all about.

For more on the Cycling Barometer, go to the ECF website.

Give us a hand - help us maintain this site. Please give your feedback or make a donation.